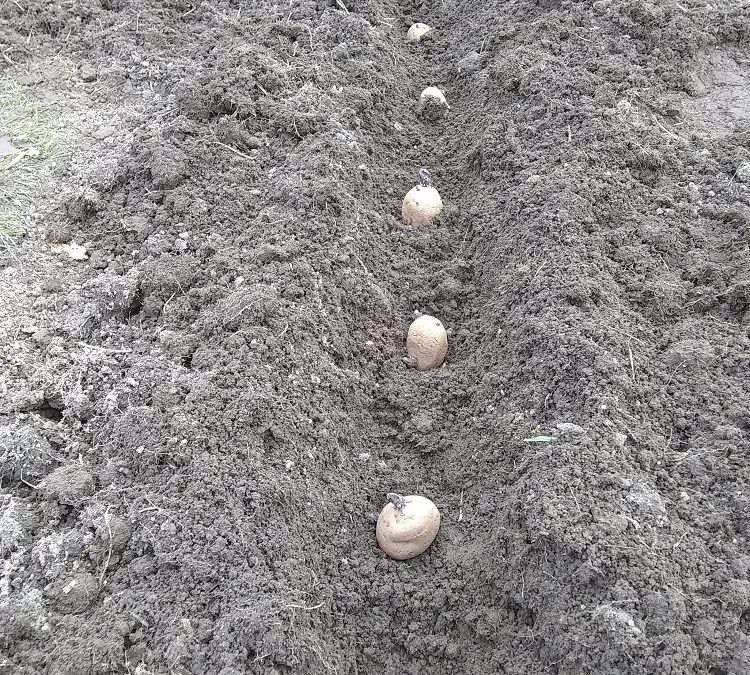 We’re trying to grow our own potaotes from home.

In addition to planting some first early potatoes in bags in the back garden we have planted some 2nd early seed potatoes in rows in the front garden.

We planted the seed potatoes at a depth of about 15cm, in rows about 40 cm apart and with gaps of about 30cm between each seed potato.

Here is a picture of a row of seed potatoes being planted: This is a row of second early seed potatoes being planted.

Before you plant seed potatoes they need to be ‘chitted’, which basically just means that they need to have sprouted shoots.

To do this you just need to leave the seed potatoes in a cardboard box for a few weeks with the ‘eyes’ (parts of the potatoes which will produce sprouts) pointing upwards. They also need to be kept in a frost free environment whilst they are being chitted.

Here is a picture of the second early seed potatoes that I planted in the above picture after chitting: 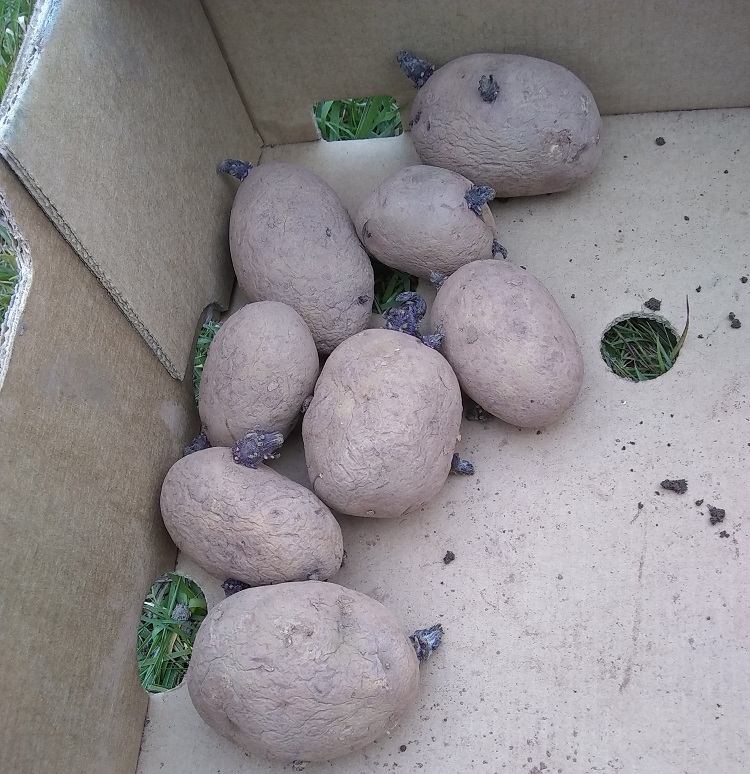 As well as using seed potatoes that you buy from a shop or garden centre, you can in fact plant potatoes from the cupboard that you have forgotten to cook and eat, as long as they have sprouted.

In fact you can cut them in half to produce 2 ‘home made’ seed potatoes as shown in this picture: 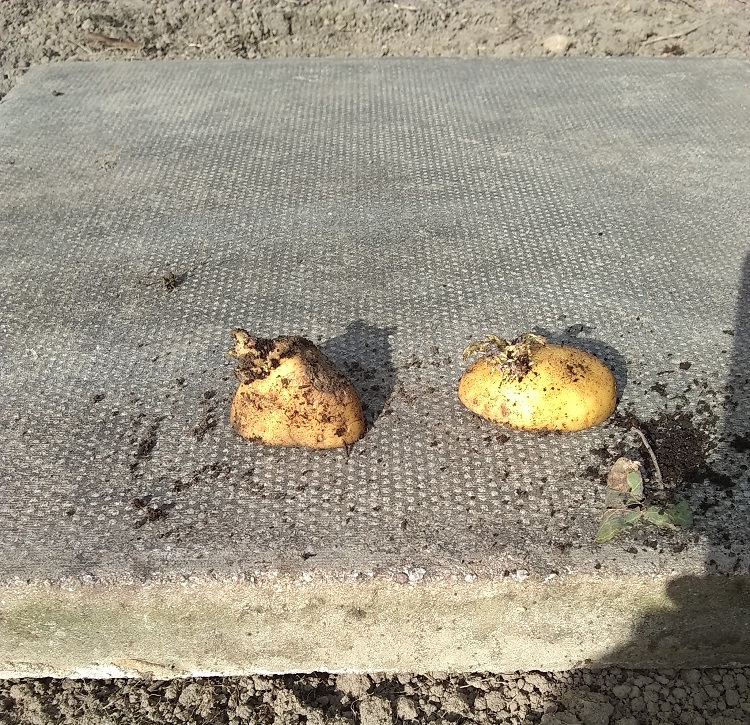 This is an ordinary eating potato which has sprouted, cut in half and ready to be planted as 2 home-made seed potatoes.

In addition to the rows of second early seed potatoes, we planted a few of these home-made seed potatoes to see how well they grow into plants and produce crops of new potatoes.

As you can see from the picture below which was taken four weeks after the other photos were taken, some of the seed potatoes have started to grow into plants: Four weeks later, the seed potatoes have developed into plants.

It’s now a few weeks later than it was when we took the above photo and the potato plants are growing really well.

As they grow, it is important to ‘earth them up’.

When earthing up, you cover the lower and mid-section of the potato plants with the surrounding soil or compost, leaving the uppermost part of the plant exposed so that photosynthesis can still occur in the leaves to produce the glucose and then starch required for the plant to produce potatoes.

Earthing up provides the potato plants with more room to produce underground tubers (the edible potatoes).

Earthing up also protects new leaves from frost damage and prevents sunlight from making potato tubers turn green. Green potatoes contain solanine. Solanine production is the method the potato uses to protect itself from insects but this substance can harm humans if the concentration is sufficiently high.

This photo shows the potato plants straight after we earthed them up and watered them. When watering potatoes they should be moist but not saturated: We have now ‘earthed up’ our rows of potato plants.

A couple of weeks after we took the above photo, there was a very cold night and some of the potato plants were damaged by frost.

In the picture below you can see where the frost had affected the leaves: This is what the plants looked like shortly after being exposed to a hard frost.

Fortunately, the plants were earthed up and the damage caused by the frost was limited to those areas of the plants which were above the soil and, as you can see in this picture taken a couple of weeks after the frost damage, the potato plants made a full recovery: The potato plants recovered from the frost damage.

It’s now mid July and we’ve dug up the row of potato plants labelled in this picture:

This hands are pointing at the row of potato plants we dug up.

Here is the pile of potatoes we harvested. After we had bagged them up we weighed them and their total weight (mass to be exact 🙂 ) was 8kg! 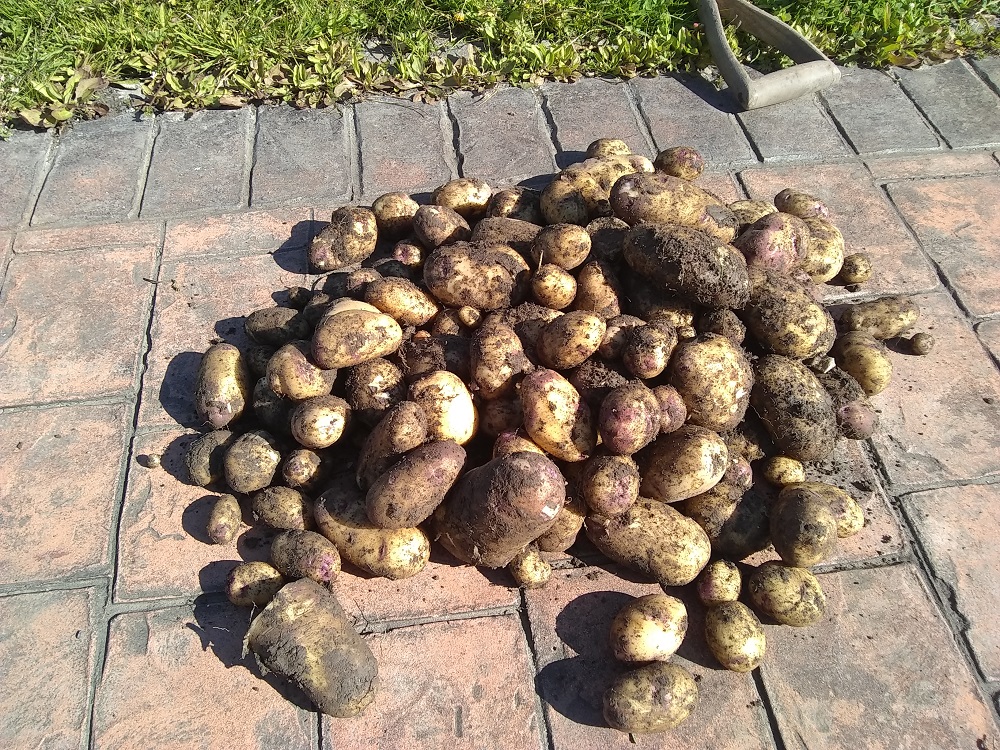 This is our first crop of potatoes from plants which were in the garden itself rather than bags.

This is our crop from the second row we harvested (although there are also a few small turnips at the top right of the picture as well): This is our crop from the second row of potato plants.